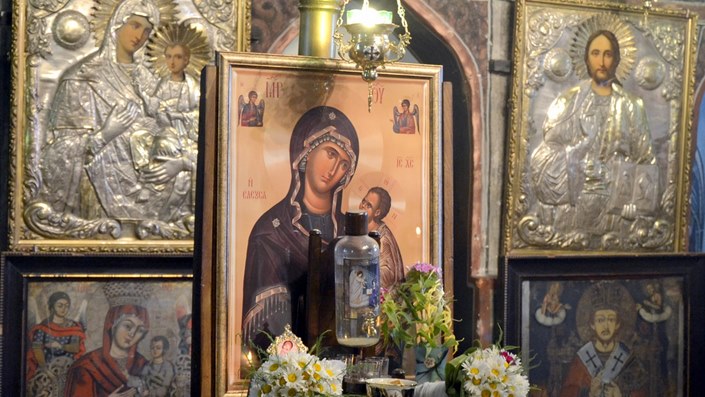 One of the most popular pilgrimage places in the whole world for Orthodox Christians is the Ostrog monastery in Montenegro. It is considered to be one of the most significant monasteries in the Balkans and the most visited Orthodox shrine in Europe.

Situated in the large rock called “Ostroška greda” 900 meters above sea level in Danilovgrad Municipality, the monastery is often described as a true masterpiece of nature and mankind.

It was established in the 17th century in the honor of Saint Basil of Ostrog who was buried inside and who is believed to have miraculous powers for many pilgrims who come to visit Ostrog.

Each year there are hundreds of thousands of visitors from all over the world, of all nationalities and religions. Only during the summer, there are more than 300.000 people who come to find their peace and salvation in the authentical and beautiful Ostrog.

The history of the Ostrog monastery in Montenegro is one of the most miraculous ones and here’s how it all began.

History of Ostrog monastery from the 17th century

Ostrog monastery in Montenegro was established in the 17th century by Basil (Vasilije), The Metropolitan Bishop of Herzegovina. It was built on the site of the most remote cave hermitages in which Saint Isaiah of Onogost led an ascetic life.

Saint Isaiah has built a cave church in the Ostrog cliffs called “The Presentation of the Holy Mother of God”, still without any monastery property. With the arrival of St. Basil who has been searching for a suitable place to lead ascetic life himself, he chose these hard-to-reach hermitages for the construction of the future monastery.

One of the main reasons for the almost unreachable Ostrog monastery location is to protect it from the Turkish invasion, which lasted more than 500 years in the Balkans.

The Upper Monastery – the resting place of St. Basil

One of the most interesting appeals in that area is the vine which grows out of the rock. 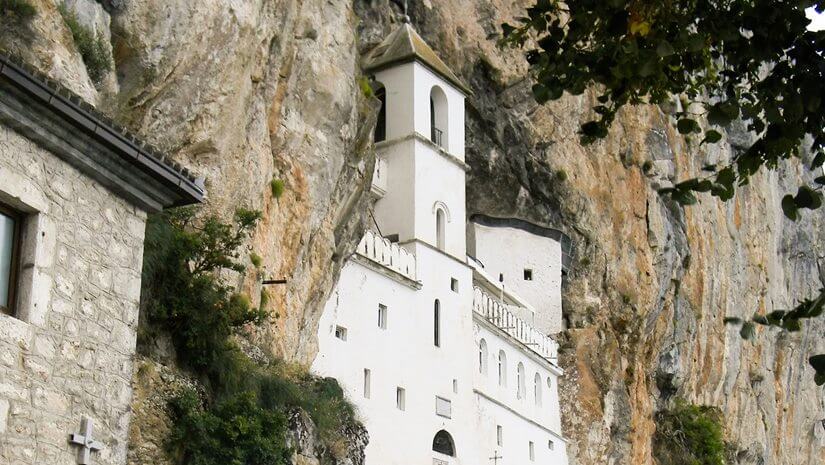 The Lower Monastery – the endowment of the archimandrite of Ostrog

St. Basil, besides taking care of the prayer and worship needs of the brothers, also took care to provide food sources and income for the inhabitants of the monastery. He was buying land from the peasants, where the Bishop built a boarding house for younger monks.

The core of the Lower Monastery was created with a large complex of monastic property composed of forests and arable land. The Church of the Holy Trinity, which is located in the center of the Lower Monastery Complex, is the endowment of the abbot of Ostrog, Archimandrite Josif Pavićević from the year of 1824.

It was built with the help of parishioners Bjelopavlić and Pješivac, with the blessing of the then Metropolitan and ruler of Montenegro, Petar Prvi Petrović Njegoš.

Ostrog monastery from the 18th to the 21st century

Throughout history, the monastery has been protecting the religious and national identity of the people in Montenegro, often providing refuge to warriors. In the 18th century the monastery also received an educational function because people in Ostrog established a school on the property.

Luckily, the two churches in the caves did not burn in the fire and today they represent an authentic construction from the 17th century. The Russians donated the main door and two large icons, while the current interior was painted by Naum Andrić in the second half of the 20th century.

Ostrog monastery miracles and other chronicles

When it comes to the monastery miracles there are many of them that are truly amazing. The first miracle, among many of Ostrog miracles, is the unbelievable Ostrog monastery location and how it was built in an almost vertical background, high up in the large rock. Back then, in the 17th century, there weren’t construction techniques as they are today in the modern world.

One of the most famous miracles happened in the year of 1913. when the baby fell from the top of the monastery and remained unharmed.  This story is retold to this day and continues to amaze people from all over the world.

It is believed that the spirit of Saint Basil of Ostrog helped people to be healed in the same way as Jesus Christ performed miracles, such as: making the blind see, the deaf hears, and the immobile walk, and so on.

The miracle of the unactivated grenade during the German attack

During the II World War, in February of 1942., the German army bombed the Ostrog monastery in Montenegro with one grenade from a cannon which hit a stone wall above the Upper Monastery, shattered the door to the Church of the Holy Cross, but did not explode. The grenade crashed into two parts.

An expert examination later determined that the grenade was completely functional, but according to a common belief, Saint Basil did not allow it to explode and destroy the monastery. This grenade is still kept in the Upper Monastery. 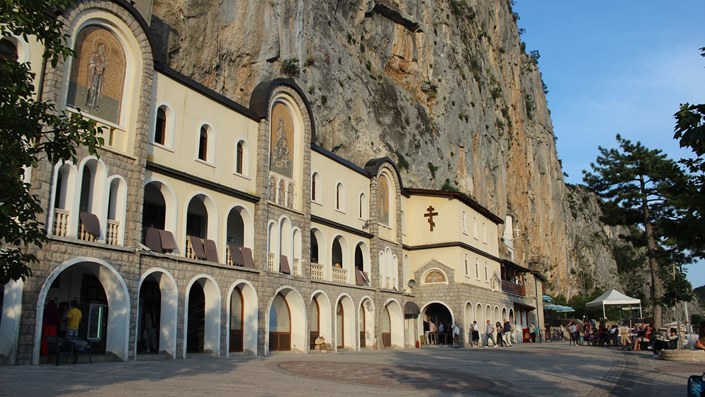 The apparitions of St. Basil from his death until today

The first recorded apparition of St. Basil took place seven years after his death, in the dream of the abbot Rafil Kosjerac. After that dream, the abbot opened the tomb and was confronted with a perfectly preserved body of the Saint and the specific incense of the basil.

The last such case that was written about in the media happened in 2015, while Metropolitan Amfilohije Radović served the liturgy. The diocese of Šavnik reported that people then briefly saw the figure of St. Basil of Ostrog.

The tradition of the pilgrimage – a barefoot walk in Ostrog

The well-known tradition among the pilgrims is to walk the 3 km from the Lower monastery to the Upper monastery barefoot. Pilgrims have to pray before entering the Church of the Presentation to Saint Basil of Ostrog.

They also donate clothing, blankets, or consumables like soap to the monks. The feast day is celebrated on 12 May every year, which is the date of the death of the St. Basil in the Gregorian calendar (29 of April in the Orthodox calendar) which is also known as the Saint Basil the Miraculous one.

Each day, in the monastery there are worship services which are church prayers and rituals that are performed in order to get closer to God and Christ. Daily worship services are held in the Ostrog in the mornings, alongside the reading of the gospel, the sacred secret of anointing, and other religious rituals in the afternoons.

In the monastery of Ostrog, the act of anointing is regularly performed. The anointing originates from the apostles, as evidenced by many religious writings, and represents the anointing of the sick with holy oil in order to help the sick one to be united with God and Christ and to be healed.

There are many stories of how the St. Basil of Ostrog has healed those who were sick. The Ostrog monastery is a holy place where many people come to seek salvation from St. Basil of Ostrog who is one of the most miraculous and beloved Saints in the Orthodox religion.

From Kotor to the monastery, you can take three routes. One of them is to go around the Kotor Bay, across Risan and then uphill to the road that goes from Trebinje to Nikšić, which is 15 kilometers away from the monastery.

The second route is the road which leads across Budva and near Podgorica to Nikšić. The third one is to travel from Kotor to Lovćen, through Njeguš and Danilovgrad to Ostrog. The same routes you can use if you are arriving from your accomodation in Porto Montenegro, the most luxurious places to stay in Montenegro, with the gorgeous platinum marina.

Don’t miss a chance to visit Ostrog, one of the most important religious sites and tourist attractions in Montenegro!

Porto Montenegro sits at the heart of its community. We have moved online to ensure our business remains up and running at this challenging time. We're available for one-to-one discussions and group conferences while we begin to slowly resume our normal operations in the coming days and weeks, in line with government guidelines.

Get in touch via sales@portomontenegro.com to find out about our key offers and see how we can help put your plans in motion. Keep an eye out for key updates.