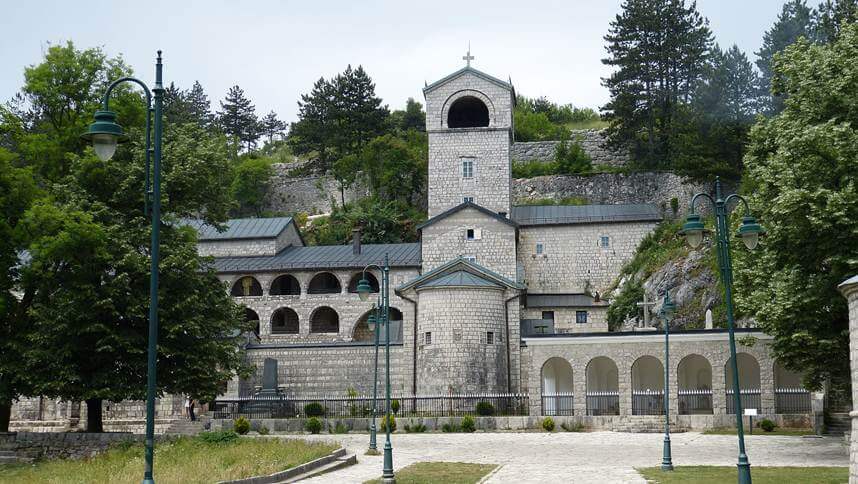 Whether you deem yourself religious or not, monasteries and their churches usually represent a striking appearance you are not immune to, regardless of your religious beliefs. monasteries in Montenegro belong to the Eastern Orthodox church, a second largest Christian church in the world.

It’s architecture and art is well defined and is quite distinct from Catholic cathedrals for example, which is precisely what you can see for yourself once you head to Montenegro. We recommend these religious sights first and foremost because of their timeless beauty – something that a non-religious person, or a person belonging to another religion can appreciate, aside from believers.

Here we will try to sum up Montenegro’s greatest and most important monasteries, the true representatives of Montenegrin Orthodox Church, places distinguished by unique beauty, architecture, spirituality and stories about past ever so turbulent. We present  every prominent monastery Montenegro exploring will uncover.

Ostrog Monastery – A place where miracles are possible

Ostrog Monastery is located between towns of Danilovgrad and Niksic, and dedicated to Saint Basil, who lived in the 17th century. The body of the saint is kept as a reliquary in two small cave-chapels. The miracle connected to the founding of Ostrog says that the body of the saint was found 7 years after his death, without even starting to decompose.

Ostrog Monastery is visited by worshippers of other confessions, which is why here you will encounter Muslims too, aside from Roman Catholic and Orthodox Christians, all due to the monasteries healing properties and spiritual changes that inflicts upon its visitors. 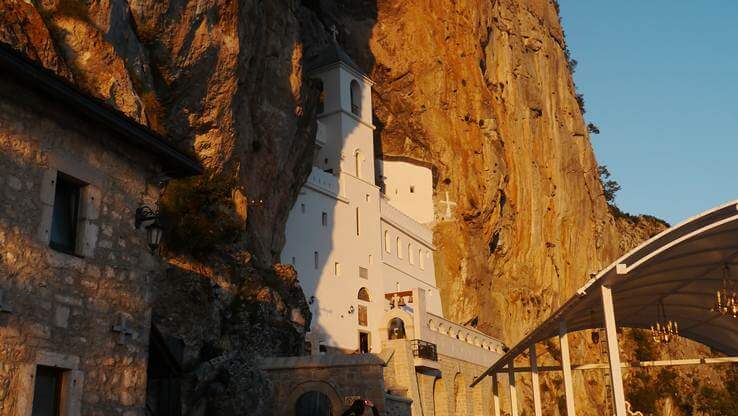 Moraca Monastery is built in distant 1252. by Stefan Nemanja, at 46 km of Podgorica. The architecture of the complex is quite simple, which is exactly what distinguishes a Byzantine style from the rest.

There are two churches within the monastery complex – the church of Assumption of the Holy Virgin and the smaller church dedicated to St. Nicholas. The estate is decorated by a beautiful garden courtyard making you feel as if you stepped straight into the 13th century, which is exactly the period when most of the frescoes were painted.

Piva Monastery Montenegro – at the source of the Piva River

Also known as the Church of the Assumption of the Holy Mother of God, Piva Monastery is located near the source of the Piva River in northern Montenegro. Originally, the monastery was placed exactly at the source, approximately 3 km away from the proposed hydroelectric plant.

In the period between 1969. and 1982. the entire monastery was moved from its original position, which meant the exact removal of over 1000 fresco fragments and other sensitive parts of the already ancient medieval monastery. What distinguishes Piva from many other medieval monasteries is the fact that it’s construction was conducted with the permission of Ottoman rulers, in the period between 1573. and 1586.

It was founded by Savatije Sokolovic, the kinsman of infamous Grand Vizier Mehmed Pasha Sokolovic, which is why at Piva you will encounter a unique fresco depiction of Savatije and Mehmed Pasha, which is highly rare when it comes to Christian churches. Speaking of frescoes, the better part of the church was painted by Greek painters.

Speaking about Savina Monastery Herceg Novi is renowned for this precise monastery, mainly due to its fresco art. The monastery is composed of three churches, with two of the being dedicated to the Dormition of Mother of God. The third one is a separate church of St. Sava, and is the smallest of the three, the whole monastery belonging to the Montenegrin Orthodox Church.

The other two churches, colloquially known as Small and Big, create one entity together with the sleeping quarters and a treasury. The small church is distinguished for its unique frescoes, mainly depicting Great holidays and Life of Jesus, painted by a famous 15th century Kort fresco painter – Lovro Dobricevic.

These frescoes are a pure example of mixture of Byzantine icon painting and a Gothic expression. According to some records, the small church dates from the early 11th century, while the big one is younger, founded in 17th century and a true masterpiece of Dalmatian baroque.

Cetinje Monastery in the mountains

Cetinje Monastery is located in the the former capital of Montenegro – Cetinje. Founded in the 15th century, while the state of Zeta still existed, it is a legacy of ruler Ivan Crnojevic. Today it’s a main seat of all Montenegrin bishops, for the last 500 years, as well as the epicenter of Montenegrin education and culture over the centuries.

Cetinje Monastery is locally known as Cipur, derived from the Greek word kipurion which translates as “a wonderful garden”, but unfortunately, its beauty got tarnished when the monastery was ruined in 1692. during one of the breeches of Sulejman Pasha Busatlija on Cetinje.

There are a few testimonies that record the original appearance of the monastery from the time it was founded, before it was reconstructed twice, once in a 13th century, and in the period between 1925. and 1927, when it got its present looks. The nucleus of the monastery is the church of Birth of the Virgin.

Cetinje Monastery is especially renowned for the holy relics that are conserved here, them being the entire relics of Sveti Petar Cetinjski, the hand of Sveti Jovan Krstitelj, part of the relics of Teodor Stratilan as well as the segments of the Honorable Cross, making Cetinje Monastery one of the richest treasuries in the Christian world.

Our Lady of the Rocks Monastery – the jewel of Boka Kotorska

Our Lady of the Rocks Monastery is probably the most picturesque monastery in all of Montenegro. Situated on a small islet, across from the one of the most beautiful Boka towns, Perast. The church is of the same name, raised in 1630. by fishermen from Perast.

The legend tells that these fishermen found themselves run against a rock after a shipwreck, where they found an icon of Holy Mother of God with Christ. After this event they vowed to build a sanctuary dedicated to her on this precise spot. Since the island is artificial, it has to be maintained, which means that seamen bring stones even today, in respect to the old tradition.

In the interior of the Our Lady of the Rocks monastery  the marble altar really stands out as a piece of work of a famous Genoan sculptor – Antonio Kapelano, together with the 15th century  icon of the already mentioned famous painter Lovro Dobric. 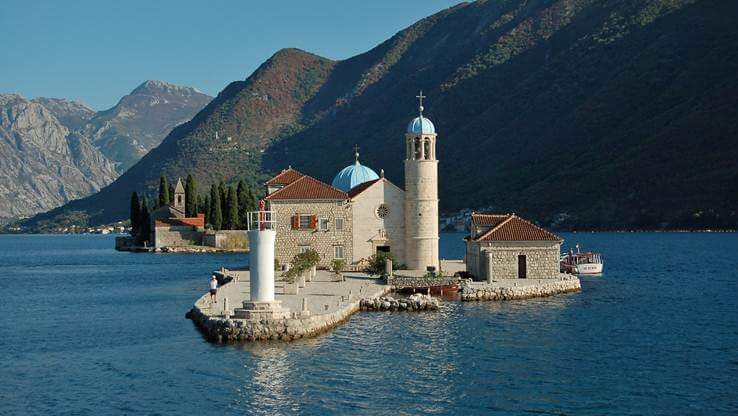 Often called Podmaine, this monastery got its name by a nearby hill, situated in a close vicinity of Budva. Podmaine has  agreat historical importance as a strategic meeting point of the tribe Maini. Unfortunately, this monastery has not been preserved in in its entirety, since the rebellion that happened in Boka Bay, after which only the church of Sveta Petka was renewed.

The complex of Podmaine was composed of the Smaller church dedicated to Assumption of the Holy Mother of God, and was built in the 15th century. The inscription above the doors of the port of the small church mentions the year of 1630 as a year of the Podmaine complex renewal, as well as the year of painting of the church.

The bigger church also existed, but remained unfinished since then. Apart from it’s holy function, the Podmaine monastery also served as a residence of the Cetinje metropolitan for a brief time.

Rezevici Monastery is located on the highway to Petrovac, named by Pastrovici tribe Rezevici. The exact record of the monastery foundation has not yet been established, but an old legend says it has something to do with Nemanjici.

The Rezevici Monastery complex is composed of two churches, sleeping quarters and an economy building. The smaller church of Uspenje Bogorodice is distinguished by its beautiful fresco painting, which makes you assume that the donor of the church, Stefan Prvovjencani, has been buried here.

The second church dedicated to Saint Trinity has been built in the 18th century, with a belfry left. This church is a legacy of emperor Dusan. Rezevice Monastery was ruined in a earthquake in 1979., but was restored afterwards.

Monastery Dajbabe belongs to the Montenegrin Orthodox Church, with the church foundation in the shape of a cross, a special religious edifice to visit. It’s situated near Podgorica, below Dajbaba hill, which dominantly raises above Zeta valley.

Dajbabe Monastery is dedicated to Uspenje Bogorodice, founded in 1897. In the beginning, only the space of the cave was used as a sanctuary, with the plan to be expanded later with chapels. The visible part of the church is situated outside the cave, depicting a spacious entrance porch with two bellfries.

The Dajbabe Monastery also possess a reliquary with the relics of St. Simeon Dajbabe. Considering the fact that Dajbabe Monastery is a work of both man and nature, it’s certain every visitor will have a unique experience once they visit it. 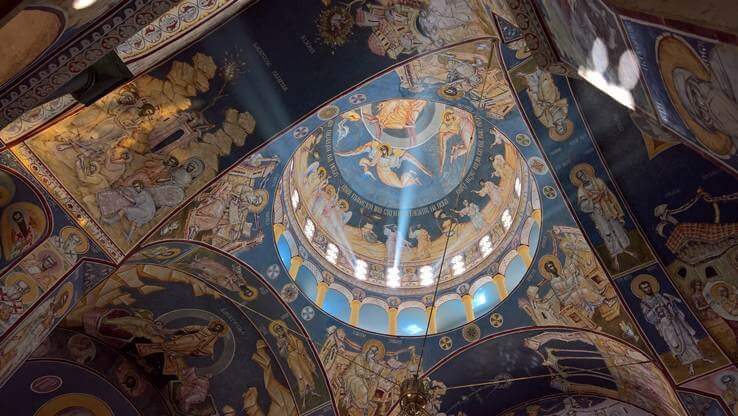 Female monastery Our Lady of Mercy

Ancient nunnery Our Lady of Mercy is another monastery that graces the Bay of Kotor, not far away from Tivat. It is the smallest island out of three in the archipelago, including the Saint Mark and Island of Flowers. The monastery has a household, sleeping cells, beautiful garden as well as the church dedicated to Blessed Virgin Mary.

The whole complex of this female monastery is surrounded by 1.5 m wall, being that this monastery is also a legitimate home to nuns. Our Lady of Mercy was founded in 15th, but since 16th it belonged to the Franciscan order, but somewhere in the beginning of the 19th century it was passed to Kotor bishop and Catholic priests.

This monastery has an interesting showpiece, namely a wooden representation of the Virgin Mary, made in 14th century. It was created by one of the hermit monks who founded the monastery of Celestians. The depiction of Virgin Mary is unique because it presents her in a highly unusual way, not to mention – unusual position. This statue is Virgin Mary presented as a sitting pregnant woman, holding her tummy in her hands.

Of course, she is an eternal symbol of motherhood here, but, nevertheless, highly atypical depiction in Christianity. Aside from this statue, the island with the ancient Montenegro monastery complex, church and belfries is one of the must – see attractions of Tivat Bay.

It is a shining example of medieval architecture so visitors, especially those accommodated at Porto Montenegro, can easily reach it bay boat or a yacht charter regularly departing from Porto’s marina.

As you’ve probably concluded by now, territory of Montenegro is covered by a large number of monasteries, mostly belonging to the Montenegrin Orthodox Church, as the bigger portion of population is of Orthodox denomination. The Catholic churches are located mainly in the littoral area of the country, mostly because of the past Venetian dominion on the coast.

Being that there are more than 50 different monasteries in our small country, we can say that every monastery Montenegro can offer is special in it’s own way – whether due to their magnificent history, incredible fresco paintings, iconography, or simply because of the stunning Montenegro nature they are surrounded by.

In any case, Montenegro monasteries are worth visiting, so of you have the time, try and visit the ones we just pictured for you, from the Byzantine period until modern times, with a spiritual power that will certainly find a way to enchant you.