On the outskirts of Budva, on the long and sandy shores of the Adriatic coast of Montenegro stands a beautiful sculpture of a young girl, forever frozen in a graceful pose. This monument is called The Budva ballerina statue, equally as known as the Gymnast statue from Budva.

Beautiful bronze sculpture of a girl, frozen in time, waiting for someone and forever dancing, leans against one of the most beautiful beaches of Montenegro – Mogren beach gazing into the walls of Budva’s Old town. Both of these sea-sights are very popular and equally as visited so when in Budva, you should take a walk around the Peninsula and take a photo by the lovely ballerina statue.

The souvenir shops sell the miniature model of the Budva ballerina statue so you can take your Montenegrin vacation memory anywhere. But before you set your sails on the Adriatic coast of Montenegro it can make no harm to learn more about some interesting facts of the Budva ballerina statue and get to know the history before and around the making of the monument and of a young woman who forever awaits for her sailor groom. 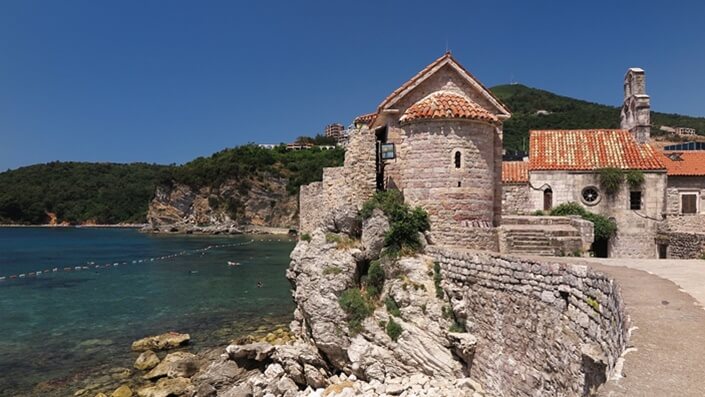 A ballerina, a gymnast and a beloved treasure of Budva

Budva is one of the busiest and probably the most crowded towns of picturesque Montenegro on the Adriatic Sea. As we have mentioned, it has many important and time-worthy seas-sights that are well known and well studied, but the most beautiful one, made of bronze and depicturing a sculpture of a girl – has, in fact, many flaws.

One of them is considered to be the fact of the ballet dancer statue Budva is most proud of – the ballerina of Budva is not actually a ballet dancer.

Ballet Dancer statue Budva cherishes so much, or the female Gymnast from Budva – in fact, does not have the main attribute of a ballerina – a special skirt that ballerinas wear, called a “pack”.

If you most carefully consider the neat, sculpture in bronze, you can clearly see that the Ballerina statue in Budva does not wear clothes at all. That’s why some tourists and local jokers like to call this dancing sculpture in Budva – “The Girl Who Lost her Swimsuit”.

That was the time when the locals started for the first time addressing the ballerina sculpture in Budva as The Gymnast of Budva, but still, the beautiful and gracious sculpture stayed one of the most famous and photographed attractions, not only of the seaside town of Budva but of all our beautiful country of Montenegro.

The inspiring myth behind the Budva ballerina statue

When it comes to ballet dancer statue Budva prides in, the inspiration of a sculptor Gradimir Aleksić to make such a beautiful monument and the artefact of Budva, was an old legend. The story behind the Budva Ballerina statue lies in the lost love of one ballerina and a sailor from Budva.

Every day she came to the shore waiting for his return and watched the waves in the hope that they will bring her beloved man back. But, due to destiny or bad times, and as it always happens with the stories that make a great inspiration – the groom did not return from his voyage, and his young bride died of a broken heart, keeping her faith and mind just for him.

The Budva Ballerina Dancer is considered the main symbol of the city, and that is not easy to accomplish considering that the Old City of Budva has many important, historical buildings and monuments. Nevertheless, amongst the Saint John Church, numerous roman villas and museums – the Budva ballerina statue won the romantic side of Montenegrins and became the most cherished monument.

What about the gymnast part of the story?

The gymnast girl of Budva is, as it always happens, just one of the many myths surrounding a monument this old, so we will try to present to all of you some of the beliefs that are most common and more probable to come across on.

In the version about the Gymnast statue Budva tried to incorporate the memory of once-famous Montenegrin gymnast, whose boat crashed, falling on the rocks, somewhere in these places of the sea, but the name of the unlucky gymnast stayed unwritten, and today, the person who the statue represents – cannot be named.

There were sharks involved too!

Other locals often mention the tragic story of another young couple in love. During a swim, they were attacked by a shark. The girl managed to get out of the water, but the young man did not swim out in time. After this terrible tragedy, the girl came to the beach every evening and waited for her beloved to come out of the sea.

But the miracle wasn’t generous for these two either, and the girl could not live without her love. When she died, on the site of the tragedy, this beautiful sculpture was erected in memory of pure and uncorrupted love.

This story is probably the most correct event that presided the making of the Budva ballerina statue, because for a long time near the beach, engraved on the rock, you could find a memorial tablet with the inscription:

In the bay behind this rock, swimming with friends, on July 13, 1935, in the 22nd year, a student of the electrical engineering department, Tomašević Stevan, fell victim to a sea monster.

Some locals even argue that the Budva ballerina statue is dedicated to the daughter of local wealthy spouses who went swimming in the sea and did not return. Whoever inspired the great Gradimir Aleksić to create the elegant remnant of loyalty and fidelity, it is clear that the Budva ballerina statue represents a symbol of eternal love and grace, that annually increases its popularity by millions of tourists from all over the world. 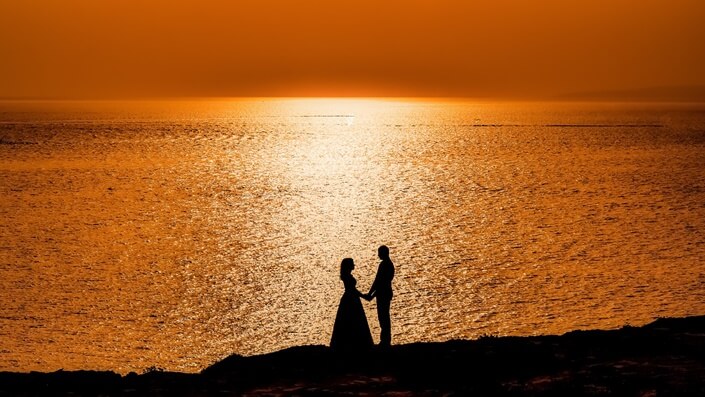 Rubbing the ballerina statue Budva will bring you luck

This beautiful sight is surrounded by a fog of legends and superstitions but also by the immense beauty of the Mogren beach right outside of the Old Town walls. Among the locals, there are, of course, many legends about the making of the Budva Ballerina statue, but they all agree that rubbing the bronzed statue gives you good luck especially if you are in love.

Thousands of tourists every year come to check the force of a magical statue. Polished and bright parts of a body of the ballet dancer statue Budva demonstrates proudly as a sign of belief and cherished culture of Montenegro. The fence surrounding the Budva Ballerina statue also testifies to love. Love padlocks stand and indicate a symbol of love, although some rust spots from the sea, salt, wind are much visible.

The bronze statue of a dancer which can be admired from the pavement from Budva’s old town to Mogren Beach makes a reference to Copenhagen’s famous tourist attraction, and it is also called Budva’s mermaid.

In this place, truly magnificent and beautiful panoramic views of the Montenegrin nature burst upon the eyes. Nearby, there are various attractions, ancient cities and fortresses, temples, historical and cultural monuments, against which you can make some interesting photos or selfies for memory.

Summer is the best time to try and apay your needs for sun, sea and new experiences. There was no better time to book some of the finest accommodation that meets every single of your needs for pleasure, affluent usufruct and vast marina, unique on this side of the Adriatic sea.