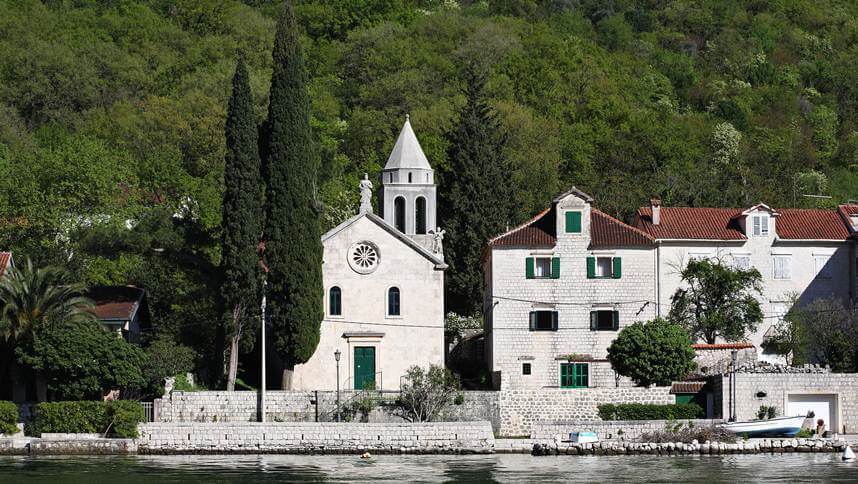 Mediterranean architecture has a long history – whether we refer to a specific construction style and its variations present in the entire region, or directly to the many advanced civilizations and their legacy that marked the area. Thanks to these civilizations alone, various examples of Mediterranean architecture and its styles have prospered here, forming an undying heritage, evident in countries like Greece, Italy and Montenegro.

What makes the Mediterranean architecture so influential is none other than it’s diversity, the kind of which we want to introduce to you in this text, from its astonishing features, to its utilization in the Village and residences in our beautiful Porto Montenegro marina. 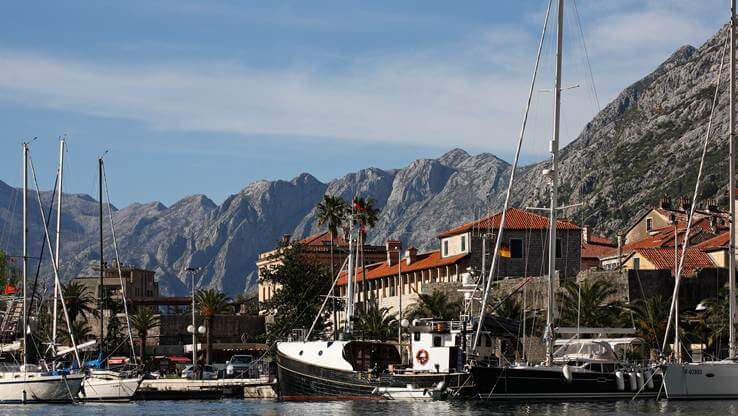 There is absolutely no doubt that Mediterranean style architecture has had a number of local and regional influences, making each of these styles quite distinct from one of another – and therefore – beautiful and unique. Not to be denied is also the fact that certain features of the Mediterranean architecture are quite common going throughout the region.

This fact is probably the result of the same kind of climate and geography the region is known for, making certain architectural elements common and desirable. These precise elements came to be what defines the Mediterranean architecture, the distinctive features that are being mixed and incorporated within other architectural designs.

The Med is a quite distinct and unique entity, and it has been for the longest time. It is a region that has always been vulnerable and susceptible to different influences, them being – maritime trade, migrations, sailors and so on.

All of these influences combined with the natural environment, regional styles and a unique way of life have led to the formation of the Mediterranean style whose elements are extremely closely knit with nature. The ultimate result are structures that are a combination of marvelous aesthetics and superb functionality.

One of the main features of Mediterranean architecture is the fact that the building materials that have been used in the construction were available in the vicinity. They were usually never imported from other, neighboring regions, even though the Med is commonly known for flourishing maritime trade.

This is why they believed that once a structure is made, the spirit becomes an inseparable part of it too. Realistically speaking, the spirit actually refers to the natural surroundings of the structure’s location. The idea is that if the surroundings are negatively exploited in any way, there will be retribution in the future.

You could say there is a certain naturalistic philosophy supporting the very style of the Mediterranean architecture, meaning that balance always has to exist between natural and man-made elements.

Unity of interior and exterior elements 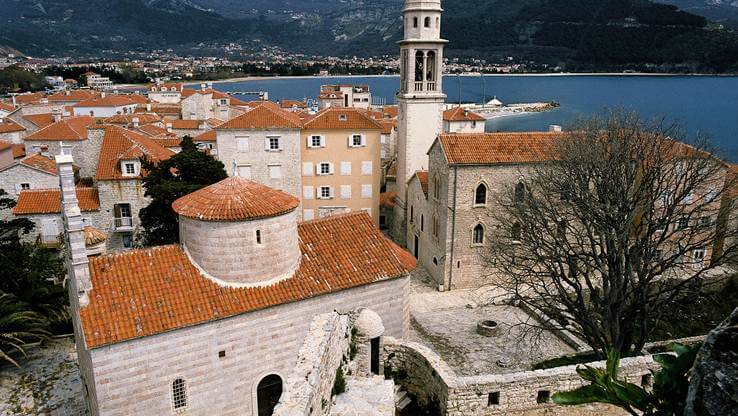 We already mentioned that one of the distinct features of the Mediterranean architecture is its’ proximity to nature. The entire region is filled with structures that have non-imposing dimensions, always in proportion with the enormity of land and sea.

There is always a subtle balance, a line drawn between the architectural form itself and the entire space surrounding it. The structure than seems as an inherent part of the landscape, and not something that was built later on. This kind of harmonious presence is maintained solely if the factors such as dimensions, shapes, size, lights and colours are considered into the overall balanced appearance.

Montenegro architecture, for instance, is a supreme example of this feature. In ancient times the outside influences could be mainly seen in the old Greek and Roman worlds, but you could say that Montenegro is a more contemporary example of Mediterranean architecture that combined the elements of the Ottoman Empire and the Venetian Republic. This element is precisely what makes the architecture of the Mediterranean stand out wherever you go.

The common elements of the Mediterranean architecture

Despite the disparities in that are often in every architectural movement, when it comes to Mediterranean style architecture and Mediterranean architecture homes, there are certain elements that can be found in all of them. These elements can be regarded as the defining features of movement, so let’s take a look at some of them.

One of the more recognizable elements is a low-pitched roof covered with tiles, often in the shades of red. Though there are some examples of Mediterranean architecture roofs having one or two slopes, now it would seem that this element evolved into a form of a barrel roof.

Mediterranean architecture homes are always constructed having natural light in mind – the more the merrier. They always entertain a fine play of light, smells, shades, and air. Some of these homes have whopping high ceilings, with their height measuring about 6 or 7 meters.

In Mediterranean architecture there are no terms such as “closed” or “confined space”, but instead is insisted on open plans, with no defined boundaries. This way the entire project becomes one unit, with minimal physical barriers, allowing subtle play of light to take place alongside other great benefits, such as good ventilation.

Whether it is a garden, patio or a courtyard, a Mediterranean architecture design always has a connection with nature. The gardens are usually large spaces that can add to the overall design of the structure, or be completely independent of it, but they are never short of private oasis, made for lounging.

Patios is an open space that is added to the main building, mainly used for dining or leisure activities. This area is generally paved, and sometimes it can be roofed.

Courtyards are not that common in home structures, but are very common in monasteries in Montenegro for example, with almost each of them having a courtyard, in all possible shapes and variants. The monasteries usually open into courtyard from the interior. 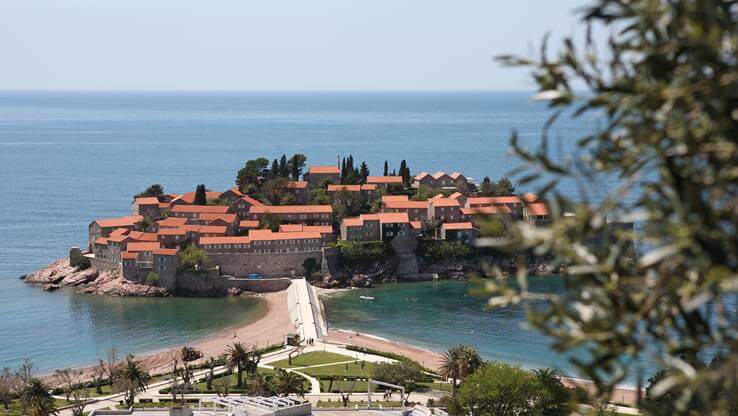 Montenegro architecture is a true fusion of eastern and western cultures’ influences, them being Roman, Venetian and Ottoman for the major part. For instance, the Montenegrin coastal region is also known as Venetian Montenegro, since it is filled with the mighty examples of this kind Mediterranean style architecture.

The most obvious examples are towns of Kotor and Perast, but other coastal towns and resort also possess this unique mix of mainly Venetian and Ottoman influence, while the Byzantine influence is the most evident inland.

Porto Montenegro village is inspired by traditional Mediterranean architecture, quite common in the coastal towns of Boka Bay. It is adorned by wide waterfront promenades and asymmetrical streets filled with stone buildings and hidden squares.

The Village exudes this Mediterranean charm and warmth, comprised in locally quarried stone facades and subtly colored buildings. The roofs have a traditional form of terracotta and clay tiles, with modern interiors that always complement the exterior. The outdoor features of The Village architecture are the epitome of the Mediterranean architecture concept – the outdoors are integral to the overall design with balconies, gardens and roof terraces.

The concept evident here, in Porto Montenegro, proves that landscaping is vital, with each building having its’ own courtyard and its’ own oasis hidden from sight. The residences of Porto Montenegro, however, possess a unique mix of traditional and modern elements, always complementary to the styling of local architecture.

If you go beyond Tivat, you’ll witness the other kind of diversity – cultural, historical and natural, but for true architecture and design lovers we strongly advise to visit our coastal region, if just for the weekend, and witness for themselves the underlying cultural legacy that Makes Montenegro a country worth visiting.