property of the month
VIEW OFFER

Our little country isn’t exactly renowned for the big islands, but there are plenty of smaller ones you graced with numerous importants sites such as fortresses, historical attractions, churches and monasteries.

On the other hand, some of them are embellished show-stopping beaches that make them worthy of visiting, while some of them are so small they are resemblant of rock formations floating on the surface of water.

Wherever they’re size is and however they look, islands in Montenegro are mixture of historical and natural attractions that are well worth of your visit, so in the text below we present you with the some of the most beautiful Montenegro islands you have to go see when you stop by for a tour of our charming little country. 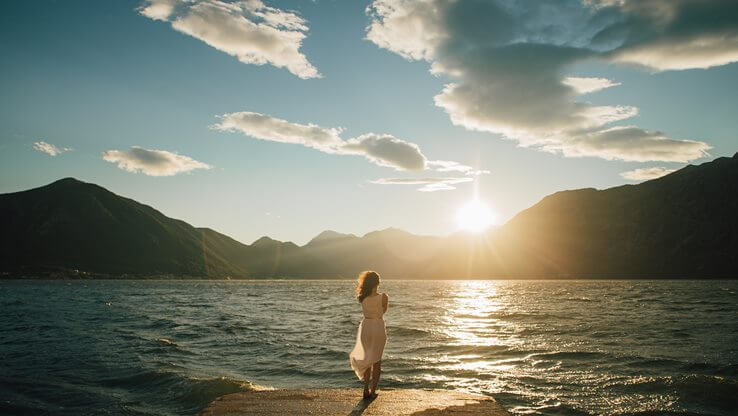 “Holy Archipelago” in Boka Bay near Tivat is consisted of three islands – Sveti Marko island, Island of Flowers and Our Lady of Mercy. All of three of these islands are famous for numerous legends, rich history as well as holy places of pilgrimage.

According to one of many legends, the island was well known for its’ charming nature and pine trees, so the Greek god decided to send here their best soldiers in order to recover after fights and heal their wounds. The Greek soldiers rested, had long walks, relished in the nature surrounding them, and ultimately, decided to stay for good.

After spending some time on the island, the started feeling guilty of all the harm they’ve inflicted upon others during the war, so they prayed to the Gods to preserve peace, and for the island to remain the same forever. In return they promised they were not going to participate in wars and that they will only succumb to violence in order to protect themselves.

In order to seal their promise, they planted an olive tree that symbolizes peace from which the whole olive grove. But, as it usually happens, the spirit of war awoken again and the soldiers broke their promise, and set out to war again.

This made the Gods furious, so they bestowed a terrible storm on the island, that destroyed all the ships and killed all the soldiers. The island became empty, with only the olive trunks as the only witnesses of this terrible event.

This is why the island used to be called “Stradioti” by the locals (which means warriors in Greek). As for the name St. Marco, it is derived from the church of the same name that existed on the island.

Floral island in Montenegro, otherwise known as a very small island located only 2 km from Tivat. It can be easily reached by boat, and even easier to tour due to its’ tiny dimensions – it is about 300 m long and 200 m wide.

It is referred to as an island officially, but it is actually a peninsula being that it is connected to the mainland by a tiny isthmus. This is why you also reach it by car or taxi, but only during the low tide, because it is usually flooded during the high tide.

The island is known by two names.

The first name – Miholska Prevlaka, was given to the island in honour of the monastery St. Archangel Michael, built in the VI century. The monastery complex used to occupy the entire island, but today only the main building and the monastic cells are restored.

The second name – the Island of Flowers, or floral island, is the name it got due to its’ incredible vegetation. Namely, the island is considered the birthplace of all kinds of palm trees, and various plant and flower species.

This Montenegro island was decorated by an olive grove that was almost completely destroyed during the breakup of Yugoslavia and all the people who found refuge on this island. However, among the rest of Montenegro islands, this one is still known for its’ lush greenery, rich vegetation and bright flowers, who stun everyone who comes to visit. 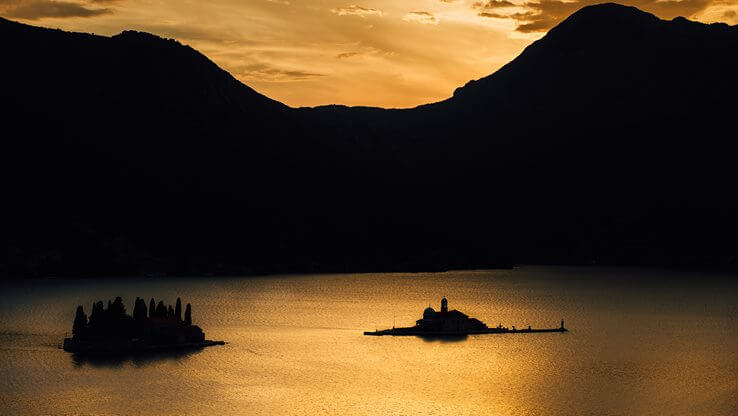 Our Lady of Mercy – the smallest island of the Archipelago

This tiny Montenegro island is positioned in the middle of the Tivat Bay, 300 meters west from the St. Marco Island and 600 meters from the Lustica peninsula.

It is fenced from the outside world by a 1.5 tall wall, constructed by the hermit monks in the XV century. The wall hides a nunnery of the same name, graced with a bell tower and monastic cells, courtyard with a gallery and a beautiful garden.

Many legends and stories are told of this Montenegro island, famously because of its’ rich history and its’ religious significance. The island is known for hosting numerous religious ceremonies for hundreds of years, and many material remains such as carved stone altars dedicated to Juno, Roman goddess and Jupiter’s wife prove this part of its’ history.

Another legend tells a story about the three women and mothers – Juno, Mary and Dana, who founded a church and dedicated for all the suffering. It is believed that the island remains under their protection to this day.

In 1955. a small square stone was found in the undergrowth of the island, testifying the coming of Christians to the island. The stone bears an inscription in Latin saying that St. Stephen’s church was founded in the beginning of the IX century, on the site of pilgrimage.

All three of these islands are easy to reach if you’re staying in our Porto Montenegro resort, so do consider visiting them during your visit, mainly because it’s a great opportunity to learn a lot about their history and to be transported into a whole different day and age.

Old Ulcinj Island – a rocky formation in the Ulcinj Riviera

Old Ulcinj island is one of those rocky Montenegro islands, located in the northwest part of the Ulcinj riviera, near a small town of Vidikovac. The surface area of this island is only 1.7 hectares, positioned on 150 meters from the shore.

Due to its’ rocky nature, the island is not habitable, but despite that it is still fairly well known amongst tourists. For a long time, the island was considered to be a remnant of the ancient Venetian town of Dulcigno that sunk after an earthquake.

However, the archeological studies have shown us that this Montenegro island indeed was a Venetian outpost, with a role to warn people whenever potential danger was in sight.

To say that it’s only reachable by boat is redundant, but if you do want to take a look at this ancient outpost on the outskirts of Ulcinj, it can be a nice little weekend excursion. 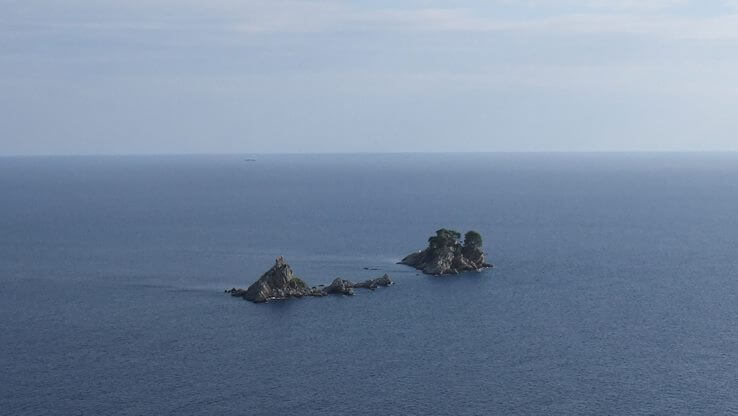 In addition to 14 various offshore islands, these two Montenegro islands positioned very closely to each other are particularly interesting.

Located in the proximity of tourist town of Petrovac, these islands are only a kilometer apart. These islands are an enormous tourist attraction due to the unique way they compliment the surrounding landscape. It is interesting to know that these Montenegro islands are positioned vertically in relation to shore, which is why it looks like one island is always in front of the other.

However, this changes if you go to the edge of town, where they will appear next to each other, so you can take a good look at them.

You can only reach these islands by water, either by a boat, cutter, kayak or a catamaran, but it’s not impossible to swim to them either, although we still believe that activity is reserved for experienced swimmers, adventure enthusiasts and daredevils.

Holy Sunday island and the church on top

Among the Montenegro islands, Holy Sunday island is one of the most interesting ones, due to the striking impression it leaves.

The island’s named after the church on it, which invokes a feeling of melancholia to everyone who see it. Similarly to the Our Lady of the Rocks and its’ church, this island has also gotten its’ name after one of the sailors has found refuge on it after a shipwreck that happened on a Sunday.

To this day locals believe that the church and the island protect every sailor in this area.

Katic island is a small, rocka island, graced with only a few pine trees that managed to adapt to the harsh conditions. There is only a small beacon that points the way to mariners.

Both of these islands invoke the feelings of immense tranquility and peace, and are definitely dream destinations if you want to spend some time alone with people who are the closest to you. 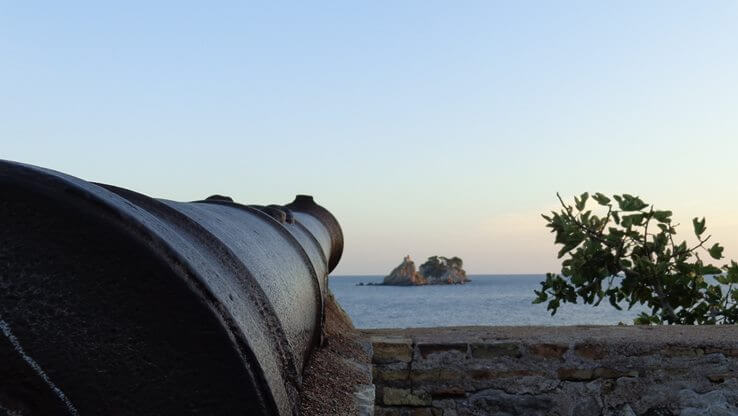 The island of St. Nicholas – Hawaii of Montenegro

This unusual Montenegro island boasts a very striking appearance, but no one is quite sure why it got nicknamed Hawaii.

What makes this island so fascinating is a number of things – incredible dense vegetation, bizarrely shaped boulders, plenty of wildlife and multiple hidden bay simply made for swimming and long, lazy summer days.

You can reach the island via a small isthmus during low tide, even though some tourists love to try passing it during high tide so it would like as if they’re walking on water.

There are many other enticing Montenegro islands, ready for you to explore them, whether you choose to visit us on a weekend, vacation or a holiday season. However, we still do recommend you leave island hopping for the summer season, since the weather will be favorable and you can lie down on the beaches, soak up the sun and swim in the deep blue waters of the Adriatic.

Another great option is to hop on a cruise or a charter from our Porto Montenegro marina, which is a unique way to visit numerous Montenegro islands and secluded beaches, or discover other sites and attractions that our off the beaten path paradise hides so well.