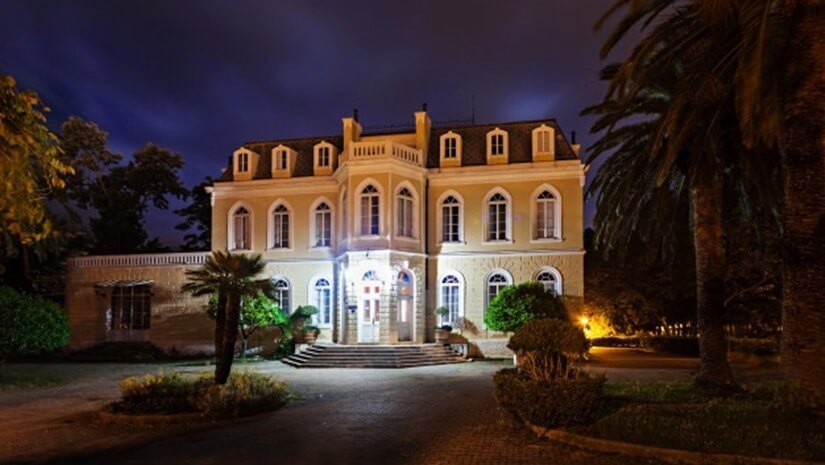 Would you like to know what historical and cultural monuments predominate in the country you intend on visiting? In what city to look for the most important ones, or how to plan the itinerary of your upcoming trip to Montenegro?

Our little list of Montenegro monuments contains detailed information about a multitude of landmarks located throughout our culturally diverse country!

You can easily navigate through the abundance of information of Montenegro monuments in various cities, historical references as well as key characteristics and important details for tourists.

Hoping that this text will be the key factor you end up glad visiting our country and that the time you spend with us becomes well spent on culture as well as enjoyment in the sun and sea. Now let’s hit the cities, there are not many of them, but the monuments they guard are numerous.

The most prominent Montenegro monuments in Podgorica

Many capital cities in Europe are famous for their prominent statues, landmarks and monuments. Podgorica is Montenegro’s relatively new capital city, but one of the main reasons the city gain this honour are attractive public places and monuments erected to people who made Montenegro great throughout time.

Where to stop when cruising in Podgorica?

1. A statue to the late Yugoslav president Josip Broz Tito

A statue erected to honour the late Yugoslav president is probably one of the youngest Montenegro monuments you should pay a visit when in Podgorica. Before being named “Podgorica” our capital for 47 years carried the name of the beloved Josip Broz Tito – Titograd (Tito’s city).

The impressive statue made by Antun Augustinčić is placed in the city centre, where many others are situated, so let’s continue our quest.

Until we get to the former capital city of Cetinje and explore the famous mausoleum, here we present to you one of the most important of the Montenegro monuments in Podgorica – the statue erected to honour our beloved ruler and writer – Petar II Petrović Njegoš, the father of modern Montenegrin culture.

The work of Sreten Stojanović was erected in 1956. in a nice park near the centre of the town, between the Morača River and the Montenegrin National Theatre.

Prince-bishop Njegoš was one of the most famous historic personalities of Montenegro; he was first known as a poet and a philosopher, but he was also an enlightened ruler and a great warrior.

The city centre is somehow dedicated to poetry and art, that is why you should not miss the following monument. 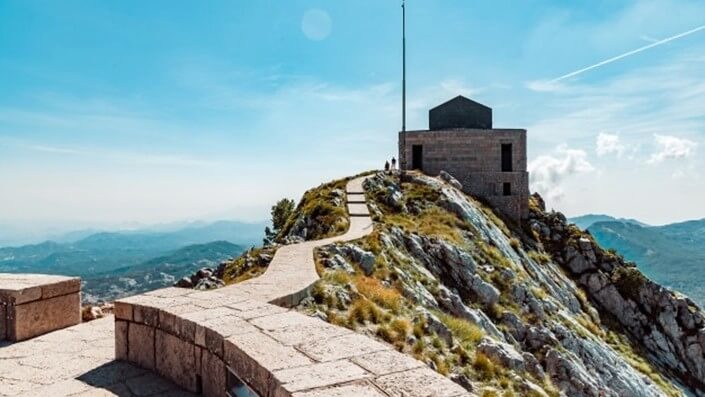 Pushkin wrote the poem “Bonaparte and the Montenegrins”.

On the corner of Njegoševa street stands the famous Russian poet, Pushkin, reading poetry to his wife Natalia Goncharova. The statue, a gift from Moscow as a sign of friendship between Russia and Montenegro.

“Montenegrins, what does it mean?’ asked Bonaparte; Is it true? – an evil tribe that doesn’t fear my power!”

This standard heroic equestrian monument is located within King’s Park and it was the first monument in the capital city that was dedicated to Prince and King Nikola I Petrović Njegoš, the seventh and last ruler of this Montenegrin dynasty.

It was erected in 2006, on the Day of Podgorica Liberation in WWII, on a plateau opposite to the national Parliament.

The bronzed monument in Montenegro capital almost 7 meters tall, is dedicated to the metropolitan and ruler of Montenegro Petar I Petrović Njegoš or Sveti Petar Cetinjski – the saint who is considered to be the founder of modern Montenegro.

One of the most impressive monuments in Montenegro was made by Nenad Šoškić and it was erected in 2006, in the park in front of the University, a very popular resting place for students and a place where often concerts take place.

Roaming through Podgorica, you will also discover odd sculptures, forgotten monuments, hidden bas reliefs and funny statues. Some of them did find their place on this list, but many of the important time relics are just too numerous for the time we have here – so do not hesitate to look them up in person.

The monumental and cultural heritage of Montenegro landmarks is defined and protected by the law considering Protection of Cultural Monuments, declared in 1991. It has been noted that in the territory of our mountainous, but sea embraces country, under protection, are placed more than 375 immovable cultural monuments (about 17% of the overall territory of the state), consisting more or less of:

The Republic Institute for Protection of Cultural Monuments in Montenegro, based in Cetinje, has been managing the Register of the cultural monuments on the national level and has been protecting the cultural Montenegro monuments in coastal cities like Bar, Kotor, Cetinje, Herceg Novi and Tivat – ancient cities that held the shield of Montenegrin culture throughout the centuries.

So, what are the most iconic Montenegro landmarks and monuments in this area?

1. The historic viewpoint above Kotor

Maybe one of the most famous pictures of Montenegro is the one that looks over the Bay of Kotor, the vast sea horizon entrapped between the rocky and steep mountain slopes. From that viewpoint, you can easily spot the coast of Perast, Tivat or Herceg Novi.

Some of the best landmarks of Montenegro and historical monuments of this area are the old city walls with Saint John fortress rising from the hills and one of the two islets off the coast of Perast – an artificial island created by bulwark of rocks with a Roman Catholic Church of Our Lady of the Rocks as the largest building on the islet. 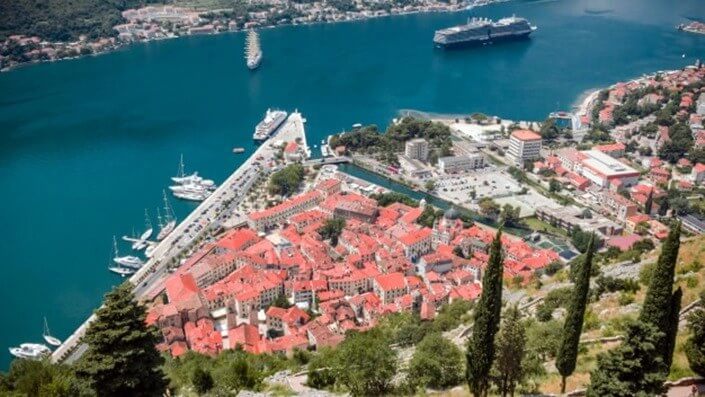 2. The most popular of Montenegro landmarks – Njegoš mausoleum

In order to reach one of the cradles of Montenegrin culture, you have to go 20 km from Cetinje and then climb 461 stairs up the Lovćen mountains. The entrance of the mausoleum is guarded by two figures of Montenegrin women made of black granite, just like caryatides.

The insides of this important landmark of Montenegro are made of marble from Boka and Brač, but the vault is covered by a mosaic of 200.000 gilded tiles. The sitting figure of Njegoš, with an open book, is a work by Ivan Meštrović and the marble sarcophagus of bishop Rade is simple – with a chiselled cross and the state coat in arms, the symbols of spiritual and secular authority.

3. Monument to The King Tvrtko I in Herceg Novi

Ascending to the throne as the Ban of Bosnia, the future king Stjepan would go on to greatly expand the lands he inherited, eventually being crowned the King of Bosnia, Montenegro and Serbia in 1377.

The one most directly responsible for the erection of this massive Montenegro monument on the beach next to Herceg Novi harbour was the founding of the medieval forerunner, originally known as Sveti Stefan.

4. The ancient heritages of Budva

You can spend a lot of quality time in Budva, sunbathing on the pristine beaches by the ancient city walls and arrows and enjoy stunning panoramic views of the Adriatic Sea. The mighty cliffs, the wonderful nature of Budva and the panoramic views of Budva Old Town, St Nikola & St Stefan islands will leave you truly breathless.

Budva is one of the busiest tourist towns of picturesque Montenegro but the most recognisable landmark is a beautiful bronze sculpture of a girl, frozen in a graceful pose – The Dancer from Budva or Gymnast from Budva.

5. The 2000-year-old olive tree as one of the Montenegro landmarks

The town of Bar in Montenegro is not only a world-renowned resort, but also a city that is famous for a large number of olive trees – there is more than one hundred thousand of them, and the average age of olive trees is close to a thousand years.

According to one local legend, a young man has no right to marry until growing the right amount of olive trees.

Among all these ancient trees stands an olive-patriarch, the same age as our new era, who is now considered the oldest olive tree in the world – with the age of 2240 years.

Montenegro has a proud moment in the history of the Balkans and World wars, with numerous monuments to prove its courage. These monuments of Montenegro are remnants and commemorate the fallen soldiers from several cities.

The relevance of the memorial monument at the end of the bridge in the municipality of Virpazar stands as a simple tribute to all those from the local area who fought and fell against the Nazis.

People still leave flowers on this Montenegro monument, respecting the sacrifice in the liberation struggle.

The monument dedicated to fallen partizans and other heroes dominates the whole site, is an extremely well-decorated memento of World War II fighters, sitting atop like a massive rock cairn. It is also very easy to reach, by the old bridge, that also represents a sort of landmark of the city.

This monumental complex in the municipality of Ulcinj commemorates the fallen fighters and civilian victims from the city and surrounding region who perished in during the National Liberation War (WWII).

The location of the monument designated to be on the hillside overlooking Ulcinj’s popular Mala Plaza beach. The monument structure is four winglike concrete shapes emanating from the concrete courtyard, standing a striking 11m tall and roughly 15m wide, making it visible across much of the waterfront of the city of Ulcinj.

Grahovo, about nine miles from the much more popular Bay of Kotor, was viciously attacked by Austro-German forces during the early stages of the war and effectively burned to the ground.

However, on July 13, 1941, a group of locals successfully disarmed a group of enemy soldiers. To honour such patriotic acts, a monument was erected to the indefatigable spirit of the local resistors.

The seven-foot-tall bronze statue on a hill in the centre of the town, surrounded by 272 concrete squares and each one bears the name of one of the locals killed during the conflict.

Montenegro famous landmarks and monuments became an important part of the social and cultural development of Montenegrins, showing our courage and commemorating important persons or events that shaped our inner being.

Montenegro famous landmarks can be found all over the country, overseeing the vast Bay and marina, spreading across the mountainous land. Get an anchor spot from where you can easily travel, choose the best accommodation and set the course around the lands to meet the proud Montenegro monuments.